​A True Work of Art

“My passion has always been in the earth,” says Alii Chang, who planted a lavender farm in upcountry Maui and made it into a work of art. 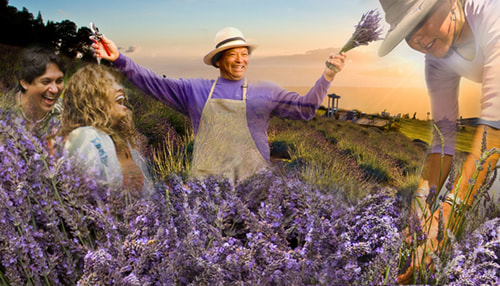 Alii Chang came by his green thumb naturally. He grew up on a 20-acre farm in , Kaneohe, on the fertile windward side of Oahu. He watched and learned from his grandmother, who could grow anything and who had a recipe for every crop. From breadfruit chips to mango cobbler to pickled star fruit, she turned the gifts of the land into delicious dishes. Her gardening and her enterprising spirit left an indelible imprint on the little boy who tagged along, learning to help his grandmother work the farm.

This grandmother, Christina Lamson (aka Lani), took the little boy to live with her under the Hawaiian custom known as hanai, in which family members informally adopt children. Alii was the second of 16 children born to his mother, later his father remarried and fathered eight more. ‘My father was charming but he was not a businessperson,” Alii recalls. In his parents’ home children were expected to follow the Hawaiian tradition of obedience without asking questions. This was difficult for a boy who always wanted to know “why.”

His grandmother was entirely different. She was tough but gracious, outspoken and aristocratic. Though her ancestry included Hawaii and Chinese, her take on life came from her English and German ancestors, who had a direct approach and a strong business orientation. “I want you to speak,” Grandma said, encouraging questions. “I’m going to teach you how to do things businesslike.”

“We got along so well,” Alii says. “Somehow we matched each other, and I just loved her garden. She bottled or pickled everything, and what we didn’t use went into the compost pile. Everything produced heavily for us.

The 20 acres of fruit trees, with flowers planted at their bases, were farmed organically and fertilized with seaweed and chicken manure. And while there was no time to be idle, his grandmother encouraged Alii’s creativity. “She made me express art in whatever I did,” he says.

In school Alii excelled in art and agriculture. At home on the farm, he was surrounded by his grandmother’s orchids and antiques, and she made sure he learned table manners and other social graces. The boy’s soul and his artistic tendencies grew in tandem, along with his agricultural skills.

Grandma taught Alii how to prune, sending him up into enormous mango trees wielding a handsaw. She stood below with a rope tied to the branch to control its fall and protect the followers below. She taught him how to bargain for the best price for a product. Alii says that it was an exciting time when the buyers came from Chinatown to purchase the precious lychee fruit. He remembers, ‘Watching Grandma and the Chinese fight over the price was a show in itself.’

Grandma Lani died about the time Alii graduated from high school, leaving a legacy of skills and knowledge that would serve him throughout his life. The young man continued his education at Business College and studied hotel and restaurant management. “I had to learn quickly, because I was on my own,” Alii says. “I was determined to be successful. I didn’t mind working hard, because everything I did I had a passion for. I dreamed big.”

After many successful ventures, Alii opened Alii Gardens in March 1976 in Nahiku, on the Island of Maui. Nahiku is an isolated community along the winding Hana highway on the rainy eastern coast of Maui. There was no piped water or electricity on the verdant 60 acres but Alii built a water catchment system with his roof and a large tank, which the rain kept full. This jungle land was perfect for growing tropical ornamental plants.

Alii began exporting flowers all over the world and by 1989 the business had grown too big for comfort, so he sold it to a Japanese company. In the meantime, he purchased a protea farm in Kula. Up a narrow country road, with a comfortable and pleasant farmhouse, Alii’s new home was already a garden, filled with the flowers that had become one of Kula’s signature crops –the protea, a native of South Africa. Unlike Nahiku on the rainy side of the island, Kula was in a drought area, with minimal rainfall each year.

Alii decided it made no sense to plant something that would require a lot of water, and he began researching potential crops. About the same time, he noticed a magazine cover announcing that the international herb Association had named lavender 1999 Herb of the Year. “I didn’t know much about lavender,” he recalls. “I didn’t even know it was an herb.”

Lavender, it turns out, flourishes in the chronic drought conditions of Kula, which has an average annual rainfall of less than 25 inches. It sips most of the moisture it needs from the mist that often settles over the Kula mountainside in the late afternoon. And lavender likes to bask in full sun on a well-drained, southwest facing slope --- perfect description of this Kula property. Though native to Europe, its subtle colors look at home on the slopes of Haleakala. The bugs and animals don’t like to nibble on it, and it grows without much attention. This was good, because Alii didn’t have time to be fussing with spraying and fertilizing. The colorful and highly valued tropical's are often the target of thieves, but Alii didn’t have to worry about that with lavender. “Nobody stole it because they didn’t know what kind of plant it was!” he says. “It was perfect for us. I think the lavender chose me. Lavender won’t grow just anywhere. It happens that we’re right here under a lucky star.”

The Ali‘i Chang Foundation will be established to provide scholarships pursuing skills training in agriculture and for agricultural education in our local schools. Scholarship recipients should embody the very qualities Ali‘i possessed including a strong work ethic, as well as innate and natural skills in growing plants, flowers, trees and food crops. Applicants should also have an eye for design, a commitment to aloha, hospitality and “aloha āina” or “love for the land.” More information will be provided as the foundation is developed.